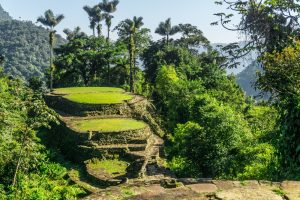 Have you ever wanted to go exploring in an area that looks like it’s straight out of an Indiana Jones movie?

“Ciudad Perdida” literally translates to Lost City. Ciudad Perdida is nestled in the Sierra Nevada de Santa Maria mountain range. It is not certain, but it is the accepted belief that this city was built by the Tayrona people sometime between 500-700 AD. This is about 650 years prior to Machu Picchu.

The Tayrona Indians abandoned the region during the invasion of the Spanish. It wasn’t until the 1970s that Ciudad Perdida was rediscovered. Treasure seekers found the remains of the ancient city – and looted a majority of the spoils; however, it remains an archaeologically valuable piece of human history. Due to the remoteness of Ciudad Perdida, getting to the city is not an easy feat; however, that is part of your travel experience.

It takes about six days to get to and from Ciudad Perdida, which is located within Teyuna Archaeological Park. You will traverse dense South American rainforest covering about 27 miles of challenging terrain. This is one destination that is all about the journey as you view the waterfalls and creeks that share in your hiking experience. Temps here are relatively humid, so going for a swim is refreshing.

Due to a desire to protect what is left of Perdida, hikes to the ruins are only allowed via guided, authorized touring companies, such as Expotur or Turcol. While you can book your tour upon arrival in Santa Marta, it is best to research the company and various tours beforehand. Tours leave every day, or every couple of days, depending on the number of signed up visitors.

From Santa Marta, you will drive to Machete. From there, you will move from campsite to campsite. Mumake and El Paraiso are just a couple of these stops. Once you have arrived at the riverbank at Perdida, there are over 1200 stone steps you will climb, at the top of which stone paths and great plazas await. Plan to spend about 2 hours to completely explore the site.